Peanut butter, mayonnaise, and banana sammies – the taste of my childhood

The Phoenix Has Risen

We all know that writing about anything involving politics, world events, things that matter in the world…these are not my topics, but I’m on a tear right now.

So I wrote that on my “real” FB because I was pissed off at some conversations in my feed that were so hateful, and petty, and fucking inane, and ignorant, that I found I couldn’t keep my mouth shut.

It didn’t work. I spent another hour this morning reading through more of the bullshit.

But, what did come of my post gives me hope.

I received almost 200 comments and reactions – all of them positive. Okay, maybe not positive, but supportive.

And what has struck me the most is the number of women who have said, “me too.”

So many women. Such heartbreak. Such strength.

I received several private messages from women who have been sexually assaulted but for personal reasons do not choose to share their stories with the world.

So here’s what I am going to offer…

If you have a story to tell, and you don’t want to tell it yourself, for whatever reasons, yet it would help you in some way to share it, tell me.

I will not ask you why you didn’t come forward before.

I will not say “Boys will be boys.”

I will not in any way, shape, or form, question the veracity of your story.

And, if you want it told to the world, I will share your story here – anonymously if you want – in a way that is empowering, liberating, and hopefully healing.

And if you just want to tell one person because you’ve never told anyone before, I would be honored to be that person.

And I will hold you with love and compassion and honor your bravery, not only in telling your story, but in surviving.

And just know that your secrets are safe with me.

I just received this message from my spell check:

First time I’ve ever seen it.

I so appreciate that spell check cares about this rule.

So many people don’t even know that you never ever end a sentence with a preposition.

In my day, ending a sentence with “of” or “under” (and don’t even get me started on “Where are you at?”) would have unleashed the terrors of a tiny little woman with a hawkish nose whose raison d’être was to insure that we gals grew up to be well read, well-bred, young women.

And part of the was to have impeccable grammar.

And to have read Pride and Prejudice.

The best part is that this is the first time I’ve ever seen it so that wiry little old lady did her job.

I am realizing that my life is actually a disaster.

I have let so many things slip through the cracks over the years: small things, important things, things for my kids, health care for all of us, money stuff, bills, and so on and so forth.

It’s all coming down on me at once; the weight is pretty big right now.

As I sit at my desk wondering what the fuck I’m going to do, I’ve also asked a million times, “How did I get my self in this situation?”

Some stuff I can blame on this last year, plenty I can blame on my ex-husband, but the majority of it falls into the category of either “I didn’t have my shit together,” or “I was distracted.”

I’m trying to not beat myself up about it and just deal, but it’s a challenge.

I can look back over the years and see the slow decline, choices made here, balls dropped there.

One thing that is slowly coming to light is the harm done by getting involved with a man so much younger than I. I stepped out of the adult with three children role and acted like a thirty year old with very few responsibilities.

I got myself a job that was fun, but doesn’t pay the bills. I hung out with folks who didn’t have almost adult children that needed different parenting than the little ones that they all have. Plenty of our friends don’t have children at all.

And mine were just old enough to be relatively independent so it was easy for me to let go and think they were okay.

When we first moved in together, I believed that I had a partner – not a boyfriend – because that’s what he said he wanted to be. And I began to let go of the tight grip I was trying to keep on my world.

I stopped fighting against my ex husband because I was happy and just wanted peace in our world.; I was afraid that the infighting would scare off MXB.

We split bills so I let go of thinking so much about them wondering if I would be able to pay them all.

I believed that I was sharing in  the responsibility of raising my boys.

Bt he wasn’t a partner – my kids certainly never saw him as a father figure – he was just mom’s boyfriend that we lived with.

And I let it all happen.

I was so distracted by my relationship and my life with this man that I let go of so much responsibility – didn’t want to deal with the reality of being an adult.

That’s exactly where I went – I didn’t act like nearly enough of an adult because I was still in my 30’s, right?

And now I am trying to grow up in all areas of my life all at once, before I end up on the streets with no teeth (because the dentist is a big thing that dropped off the radar – for all of us) begging my children to feed me a smoothie.

I’ve been saying that this year was my forced midlife crisis and I believe that is true. But there are apparently different levels involved with a full blown midlife crisis. I’ve peeled through the outer layers of heartbreak, loneliness, and redefining who I am (well, still working on that but I’m getting there.)

Now I’m down to the nitty gritty of becoming a real adult – because I haven’t been.

I’ve been in limbo.

And it is all biting me in the ass right now – on every level: financial, logistical, practical, emotional.

I’m trying to turn around years of being carefree (or so I thought until the relationship took a nose dive – then I spent my time being weighed down by all of it.)

My life looked good from the outside but underneath, it was falling to pieces, bit by bit.

And I am paying a really painful price for it now.

So I am trying to gather the pieces and pull it all together. I feel as if I am swimming upstream through Shit Creek, bumping into rocks, and swallowing a lot of water. I need to keep my head above water so I don’t drown, but I know that I am in a very precarious position.

And unfortunately, there is an emotional piece that I need to wade through with every little logistical bit.

Growing up is fucking rough.

It is so painful when you realize yet another instance in which you seriously failed your children.

I get to stay in my fantastic, amazing, beautiful, peaceful, glorious home for another year!!!!!!!!!!!

One thing I’ve realized this year is that I have done the majority of my processing by myself.

I’m not feeling sorry for myself around it – just thinking about it.

I have some really amazing friends. I have people available, if and when I call on them. There have definitely been occasions when I have shown up on doorsteps in tears, but more often than not, I have dealt with the bulk of this on my own.

Usually I am more dependent on others, more in need of hashing out every detail and getting affirmation from anyone and everyone who was willing to listen, more in want of advice and guidance from those around me.

But not so much this time.

Maybe because the way it all played out felt enough like middle school that I was didn’t want to create more of it. Maybe it’s because I felt alienated from an entire group of friends. Maybe it’s because I’m embarrassed by all of the drama. Maybe because I figure that everyone is sick to death of listening to me. Maybe because I understand that other people also have hard stuff in their worlds and I didn’t necessarily want to be my narcissistic self when others needed support. Maybe I imagined that no one could understand the absolute insanity of all that was happening.

I’ve written about it, receiving support from my readers, but so much of what has happened I kept under wraps in my writing because it hasn’t been appropriate to make some things public.

And things kept under wraps are things that I process alone.

It doesn’t matter why or why not. What matters is how I’ve done this.

Has it been good for me?

Has it made me stronger or is it that I haven’t fully dealt with my shit?

I live alone. I do most things alone. I go to the desert alone. I don’t talk on the phone.

I am absolutely a classic introvert but I hate saying that because suddenly it’s hip to be socially awkward and avoid people.

I spent most of the year hiding out – avoiding the possibility of running into anyone that I might not want to encounter.

I feel like my trips to Utah have been the saving grace but maybe it’s been a really unhealthy way of isolating myself?

Because sometimes I am really lonely.

But I might be just as lonely if I had leaned on 50 of my best friends every day all year long.

I like to think that it’s been really good for me to stand on my own.

I’m at the rambling point now so I’ll stop.

And most likely pack up the truck and head west. 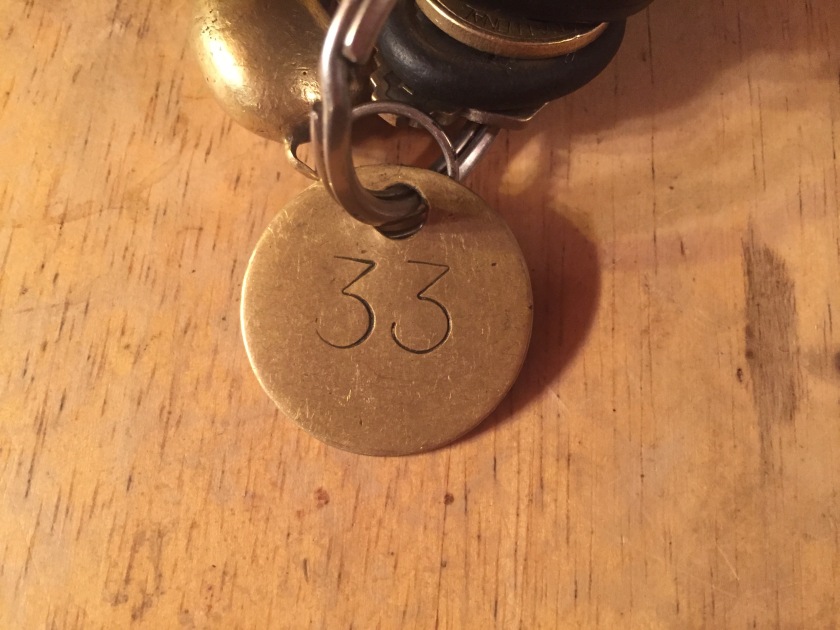 “I’m headed up Denali for a shift. If anything happens, I have the Outward Bound van stashed at _________’s place and the key is tied to the rear axle.”

Those were some of the last words I heard Mike say before he went up on Denali and died.

And today, of all days, my son popped in unexpectedly and when he threw his keys on my kitchen counter, I saw the number tag from that van that Mike had stashed in Talkeetna when he flew in to the glacier.

I didn’t know it still existed.

My breath caught and I reached for it without a thought, mesmerized; flooded with feelings: physical stirrings, an emotional rinse; just a moment wherein I was completely taken over with unconscious memory.

For a brief moment I was transported twenty years back in time and I was outside that van, about to unlock it, and open the door onto the pieces of Mike’s life that were tucked away waiting for him to come off the mountain.

The smell that bowled me over when that door slid back was a combination of chain saw two-stroke gas, dirty socks, mildewed rain gear, and wood stove smoke. It’s the smell of my memories of Mike.

As I held the 33 in my hand, my brain was breathing in the fragrance of him.

And my sweet sweet boy said, “Do you want it mom?”

Never one to take anything from my generous children, I tried to hesitate, I imagined saying no thank you, and yet “yes” flew from my mouth completely unhindered.

And now it’s mine.